I’m inching towards the two hundred film mark! I’m still enjoying watching a film a day, absorbing everything I can about the techniques utilized, the performances, and analyzing the story. So let’s get to talking about the next ten films I’ve logged! (If you’d like to know ahead of time what I watch and the ratings I give (including exclusive reviews on short films) follow me on Letterboxd!)

I thoroughly enjoyed this charming tale of two sisters (the always sublime Amy Adams and Emily Blunt) who start a crime scene clean-up business after falling into financial distress. Adams and Blunt have great chemistry, and the supporting turns from Alan Arkin and Steve Zahn add extra depth. Sunshine Cleaning is simultaneously funny, dark, heartwarming, and emotional, which is a tough act to pull off. Some moments are a little too predictable, but I highly recommend you check out this underrated gem.

I’m kicking myself for not having seen this cult classic film sooner. Scotland + Science Fiction + Amazing Action Scenes = Happy Alyssa. The plot revolves around Connor MacLeod/ Russell Nash, a man who is being investigated for a murder that involved an antique sword (which he committed, but COME ON, it was self-defense). He then reflects on his past life in 1500’s Scotland, and how he became immortal. Highlander holds up incredibly well (besides a few iffy special effects), and I loved Christopher Lambert as MacLeod. Sean Connery adds quirky star power, and the story is well-fleshed out. A must-watch even today.

Alexandre Aja’s horror film starts off predictably: Two best friends, Marie and Alexia (Cécile de France and Maïwenn, respectively), travel with Alexia’s parents home to relax. Things soon become terrifying as a stranger breaks in and hunts down everyone in the household. Marie and Alexia have to try to escape from this man’s dangerous clutches with their lives intact.

High Tension is bloody, quickly paced, and the ending is KILLER (pun intended). I just wish the majority of the story hadn’t been so predictable. Still, this is a worthwhile watch if you love gore-splashed slasher films.

A beautiful, though-provoking film from Joachim Trier, Thelma follows the titular character (played magnificently by Eili Harboe) as she goes off to school. She not only has to deal with the pressure of academia, but also her burgeoning sexuality, discovering who she really is, and the tiny fact that she has seizures that cause strange phenomena to occur. Typical experiences for young adults, you know.

Thelma is beautifully choreographed and edited, with hauntingly gorgeous visuals and an intriguing story. The pacing is slow, but I personally enjoyed getting to know Thelma and her past.

Unpopular opinion time: I pretty much disliked this entire film. Coralie Fargeat’s brutal rape/revenge film is beinh hailed as a middle finger to men (especially in the film industry) who only view women as sexual objects, but Fargeat does exactly what she’s trying to preach against. The camera constantly ogles the lead character Jen (Matilda Lutz) while glancing over the far more exposed men, which made me feel uncomfortable (and not in the way it was intended to make me feel). I thought the editing and setting were gorgeous, and the brutal revenge scenes stomach-churningly excellent, but the dragged out story and over-sexualization of Jen completely turned me off of Revenge. 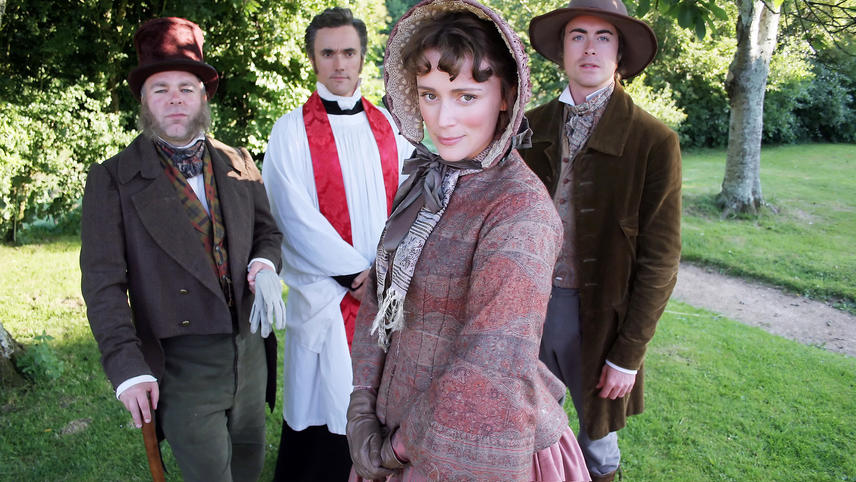 BBC movies are the film equivalent of a cozy blanket and a warm beverage, and Under the Greenwood tree is no exception. Based on Thomas Hardy’s novel of the same name, this movie follows a new teacher named Fancy (Keeley Hawes) who has arrived in a small town to care for her sick father. When she arrives, she draws the attention of three different men who hope to marry her. The story unfolds predictably, the acting is a little too theatrical, and the film is shot in a very basic manner, but it was still a nice, charming tale to curl up to.

After having avoided the Star Wars prequel films for the longest time because everyone said they were terrible, I finally decided to make up my own damn mind. This first installment isn’t horrendous, just merely average. I loved Qui-Gon Jinn (Liam Neeson) and Obi-Wan Kenobi (Ewan McGregor), and thought there were some entertaining set-pieces (especially the epic lightsaber battle). On the other hand, The Phantom Menace contains an extremely long pod racing scene that caused my attention to drift, some iffy CGI, poor acting from Natalie Portman, and JAR JAR FREAKING BINKS. I still think this is an important part of the Star Wars canon, but it’s definitely just an average film.

Continuing my prequel journey, I watched Attack of the Clones. I enjoyed this film more than Episode I, but the acting from Portman and Hayden Christensen is terrible, the CGI is still iffy at points, and the film could have cut out a few scenes to make the story tighter. I did love the backstory of the clones and learning about characters such as Jango and Boba Fett, and seeing the first appearance of Owen and Beru Lars. There are some thrilling action scenes as well, which made this a more palatable viewing experience. I had fun with this entry, but it does have flaws.

A moving, grounded film, God’s Own Country follows a farmer named Johnny (Josh O’Connor) who frequently indulges in casual sex and drinks too much. His family hires another young man named Gheorghe (Alec Secareanu) to help out during lambing season, and soon, Johnny and Gheorghe fall in love. This is a languidly paced, slice-of-life film that won’t appeal to everyone, but the cinematography is gorgeous and the relationship between the two young men is powerful. I just wish the movie had fleshed out a few story beats more. Now THIS is a sequel that manages to top its predecessor while also retaining the same foul-mouthed, gory, hilarious tone. Deadpool 2 finds the Merc With a Mouth (again played by Ryan Reynolds) trying to save a self-destructive young mutant (Julian Dennison) while also fighting off new baddie Cable (an excellent Josh Brolin). The tone is still dark and humorous, but this time there are more emotional beats that I think added to the film. The cameos are fun, and the Easter Eggs should make any fan of the comics and/or the Marvel films happy. Some of the jokes fall flat, but overall, this is a faithful follow-up which also happens to be a crude, bloody, darkly funny, yet heart-warming anti-hero movie about family, love, and loss.