It’s been a hot minute since I’ve posted my cinematic adventures, so let’s just dive into what I experienced and my thoughts about each film I consumed. (Also, if you want to know what films I watch/ what I rate them early, make sure to follow me on Letterboxd. It’s pretty dope.) The 2017 version of Jumanji is actually an exhilarating, funny, and even touching take on the classic formula. Four disparate teenagers in detention discover an old video game called, well, Jumanji and are transported into the game. Oh, and they’re also transformed into their chosen avatar. They must put aside their differences and work together to survive this treacherous game, before their requisite three lives are permanently used up. If you love video games and the original film, you’ll love Welcome to the Jungle.

The cast is superb (especially Jack Black, who has to act like an egocentric teenage girl and totally nails it), and the pacing is fast and steady. The visuals are cool, and the deeper messages the film has hidden behind it’s popcorn action facade are powerful. Sure, a couple of side characters are weak, and the villain doesn’t feel very, well, villainous, but that didn’t detract from my enjoyment of this movie.

I had admittedly high expectations for The Levelling, due to film magazines raving about it, but I was ultimately left a little disappointed and wanting more. The story is powerful, focusing on a woman named Clover whose brother has committed suicide and must return to her old home. She has a complicated relationship with her father, and must try to figure out what drove her brother to take his life.  The pacing of the film is glacially slow, though, and I found my mind drifting. The performances are solid, but they couldn’t hold my attention during the relatively short run time. I feel like The Levelling had so much potential, but it wasn’t fully realized.

A powerful, touching film that portrays the effects that war leaves on soldiers, Thank You for Your Service follows three young men as they return home after serving in Iraq. Their lives are irrevocably changed by what they experienced, though, and soon it becomes apparent how their service impacted not only them, but their families. The performances are great (especially from Miles Teller), and the message packs a major punch. My only niggle was the branching plot. I feel like this would have been a tighter movie if it had either focused on a single soldier, or each character had been fleshed out more. Still, this is definitely worth a watch.

The Congress is an incredibly ambitious film that mostly pulls off its complex story. The movie follows the actress Robin Wright as she realizes her choices for film roles are drying up as she grows older. Her management cajoles her into uploading a digital version of herself for her last film, but her life changes drastically due to this decision. This is where shit gets weird (in a good way). The film changes from live-action to animation, and things become extremely trippy. Robin battles not only from her role and team, but from her own mind.

Supporting turns from Jon Hamm, Harvey Keitel, and Danny Huston bolster this fascinating confection of WTF-ery, and Wright is luminous. The Congress definitely won’t be everyone’s cup of tea, but if you’re a die-hard fan of science fiction and have an open mind when it comes to cinema, give this a look-see.

I expected Force Majeure to be a disaster movie, and this probably hurt my enjoyment of the film. Even though this does feature an avalanche, this is NOT focused on the natural disaster (not a spoiler), but about a family that starts to fall apart after it’s occurred. The performances are good and the family dynamic was fascinating, but the story left me wanting more and some of the dialogue didn’t land for me (plus, I seriously thought I was going to be watching a different kind of film. Don’t be like me). On the plus side, though, if you’re a Game of Thrones fan, Tormund Giantsbane (his actual name is Kristofer Hivju, but I can’t help but call him by his character name) is in this film!

Let’s just get a couple of things out of the way: 1). I’m a little ashamed to admit that I watched this due to Woody Allen’s reputation and 2). this is definitely the weakest film of his that I’ve watched to date. The cast (comprised of Kate Winslet, Justin Timberlake, and Juno Temple) is great, but they’re left with a formulaic script that’s full of leaden dialogue. The cinematography is stunning, but it echoes the film itself… pretty and intriguing on the surface, but is hiding a shallow personality underneath its glossy veneer. Wonder Wheel could have been so much more, but it was merely average and left me with a cinematic hangover.

A stunning film that definitely didn’t get the love and attention it deserved from the box office, Annihilation is the latest film from Alex Garland (Ex Machina) and is based off of Jeff VanderMeer’s Southern Reach trilogy. The plot centers on Lena (Natalie Portman), a biologist who desperately wants to find her M.I.A. husband (Oscar Isaac, delightful as always). She agrees to enter The Shimmer, a mysterious area that has a high rate of disappearances. She’s accompanied by four other incredibly smart, strong women (Gina Rodriguez, Jennifer Jason Leigh, Tessa Thompson, and Tuva Novotny) to investigate this disaster zone, but they quickly realize how unprepared they are for what it holds.

Annihilation has powerful messages about the strength of women, ecological conservation, and love, and I appreciated the fact that Garland highlighted these themes. The visual effects are gorgeous and disturbing in equal measures, and the acting is top-notch. The only small issues I had with this movie were some pacing issues and few lines of dialogue that didn’t connect with me. I HIGHLY recommend you watch this ASAP.

If you’re expecting this to be an in-depth look at how Jeffrey Dahmer became who he was, you’ll be sorely disappointed (like I was). This is definitely a coming-of-age film that only subtly hints at Dahmer’s future. Ross Lynch is creepily great as the teenage Dahmer, but the plot felt very formulaic and predictable. There are certainly moments that grab your attention and actually make you sympathize with Dahmer, but the rest just feels like a typical troubled teenager story (which is a shame, considering the subject matter).

This film follows a young man (yeah, I was thrown off by the name too) named Sidney Hall (played by Logan Lerman) after he writes a novel and unexpectedly gains fame. He falls in love and lives a seemingly idyllic life… until he mysteriously disappears one day. The Vanishing of Sidney Hall had a lot of potential, but the pacing and structure of the film hindered the story instead of bolstering it for me, personally. Logan Lerman is fantastic as always, and the supporting turns from Elle Fanning, Blake Jenner, and Kyle Chandler were solid and actually saved the movie for me and held my attention. I just wish this had struck the same chord in real life as Sidney’s novel did in the film. 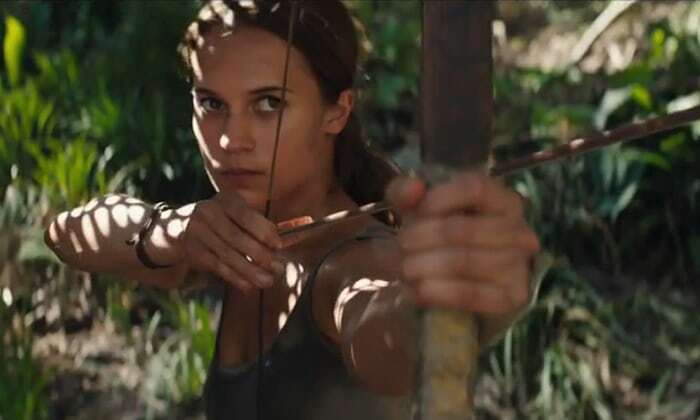 Ok, I have to admit that I’m a MASSIVE fan of the Tomb Raider franchise. I’ve played every game in the series multiple times, watched the prior films, read the comics, and have several collectible action figures of Lara Croft. This series was my first entry into the world of geekdom, and it shaped who I am today. So I adored this new film adaptation. Alicia Vikander is my favorite actress at the moment, and she just IS Lara Croft. She imbues Ms. Croft with equal amounts of strength, resourcefulness, and vulnerability, making her feel like an actual human being instead of the sexualized, practically immortal ’90’s version. I loved how faithful this film was to the 2013 video game reboot, and the action scenes were spectacular. I also loved the humorous moments and cheeky dialogue sprinkled throughout.

I did feel like the film had some weaker moments in the second half, and even though Walton Goggins is a fantastic actor, his villain Mathias Vogel wasn’t very, uh, villainous. Also, a second act reveal didn’t connect with me and kind of dragged Tomb Raider down a bit. Nevertheless, this is one of the best video game-to-film adaptations to date, and if you’re a fan of the franchise (especially the most recent entries), you’ll have a great time with TR.