Ten more movies watched, ten more reviews for your eyeballs to devour… (Also, bee tee dubs, you can follow me on Letterboxd to see advanced sneak peeks and what I rate short films)

Based on David Grann’s bestselling novel, this film is the true account of Percy Fawcett, a British explorer who traveled to the Amazon in the early 1900’s and discovered a hidden city he dubbed Zed. When he returned home, though, no one (besides his aide-de-camp and wife) believed him, and he became determined to prove the existence of this intriguing city. This is a beautifully shot, well-acted film that managed to hold my interest throughout its lengthy run time.

Charlie Hunnam, Robert Pattinson, Sienna Miller, and Tom Holland give knockout performances, and the cinematography astounds. I did feel like some aspects of the story were rushed, even though this is quite a long film. Other than that, this is a superb, fascinating account of Percy Fawcett and his multiple expeditions to the Amazon.

This was my second time watching this film, and I loved it just as much as I did on the first viewing. Saoirse Ronan is marvelous as Eilis, and the themes of discovering yourself and breaking out of your comfort zone really resonated with me this time. The cinematography is gorgeous, and the supporting performances from Emory Cohen and Domhnall Gleeson are fantastic (plus, the costume design is exquisite). A must-watch.

I was really intrigued by this film: Set in a dystopian future where families are only allowed to have one child, Noomi Rapace plays a set of septuplets who pretend to be one person. Sadly, the actual film didn’t live up to my expectations. Even though Rapace gives the roles her all, it’s really hard not to compare this film to Orphan Black. The septuplets all had different styles and personalities, but none of them were likable, and I couldn’t shake the fact that each was Rapace. Willem Dafoe turns in an excellent supporting turn, and the action scenes are awesome, but the story is messy and bloated. A sad disappointment. 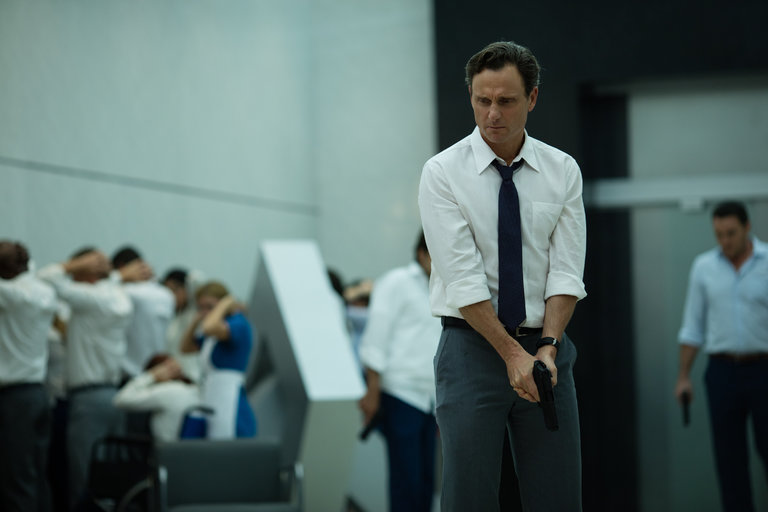 A fun, if flawed, horror/thriller film directed by Greg McLean (Wolf Creek) and written by James Gunn (Guardians of the Galaxy). The movie is set in Colombia at the fictional Belko headquarters, and everyone comes to work prepared to contribute to society. Sadly, though, they should have taken the day off. They’re locked inside the building and ordered to murder their colleagues, or else they’ll be killed themselves. The premise is solid, the gore is fun, and the story is briskly paced, but I just wish there had been MORE.

The cast is incredible, with the likes of John Gallagher Jr., Michael Rooker, Tony Goldwyn, and John C. McGinley giving their all to poorly written characters. I did enjoy the ride The Belko Experiment took me on, though, and found the ending to be satisfying. If you’re a fan of films such as The Purge, The Belko Experiment is worth a watch.

A wonderful, underrated gem of a film, The Transfiguration follows Milo (Eric Ruffin), a teenager who is obsessed with vampire films. His interest in vampires leads him to develop dark, twisted impulses, though… I personally adored the homages to films such as Let the Right One In and the sly jokes about the Twilight franchise, and loved the relationship between Milo and his girlfriend Sophie (Chloe Levine). The story is slow-burning, but it still had me in its thrall, and I was pleasantly surprised at the themes the film explores. The slow pace will turn off some viewers, but if you enjoy coming of age films with vampires thrown in, definitely allow this movie to sink its teeth into you.

I tried watching this movie when it first debuted in theaters, and HATED it. On the second viewing, though, I realized how incredibly wrong I was. This is a hard-hitting sci-fi masterpiece that tackles heavy themes such as racism and segregation. I adored Sharlto Copley’s performance as Wikus, and the design of the prawns is outstanding. I also was enthralled by the documentary format of District 9. I’ll admit it… I WAS HORRIBLY WRONG.

I CAN FINALLY REVIEW A FILM WITH SAM HEUGHAN IN IT!!! Sorry for the fangirl moment, there… Anyway, Heart of Lightness is a Norwegian film about a group of British actors (including fellow Outlander actors Laura Donnelly and Rosie Day) who travel to Norway to film the play “The Lady from the Sea”. They don’t realize that the sun never sets, and soon the dynamic between the co-stars becomes taught with tension.

I adore films about making films, and this is a cinematic beauty. Also, did I mention there are actors from Outlander in this film and that I flipped my shit when I realized this? I did? Ok, well, everyone is fantastic. This definitely isn’t a movie for everyone, and one major complaint I have with Heart of Lightness is the fact that when the cast starts speaking Norwegian, there are no English subtitles. Other than that, I thoroughly enjoyed this movie that absolutely no one knows about. A grueling adaptation of Shusaku Endo’s epic novel, Silence is the latest film from Martin Scorsese that centers on two Jesuit priests (Andrew Garfield and Adam Driver) in the 17th Century. They travel to feudal Japan spread Catholicism (which was illegal) and to locate a missing priest (Liam Neeson), who is rumored to have apostatized. The acting, especially from Garfield, is phenomenal, and the cinematography is outstanding. This is an extremely taxing film, though, and is definitely NOT for everyone. The themes of faith and religion will either entice or turn off viewers, and the brutality shown is heart-wrenching (not to mention, the nearly three hour run time is butt-numbing). Silence provokes thought, but at a heavy cost.

Check out my video review of Wind River for my thoughts on Taylor Sheridan’s directorial debut!

I’ll just get this out of the way: I didn’t hate this movie as much as a lot of people did. It certainly does not live up to the source material, though. The story follows a teenager named Light Turner (Nat Wolff, miscast), who one day discovers a mysterious notebook with the words “Death Note” written on the cover. After reading the rules listed inside, he realizes that he can kill anyone he wants as long as he writes their name down and the cause of death. Cue several gory, fun death sequences. The beginning of the film is strong, but when the second act arrives, the movie goes downhill.

Adam Wingard is a fantastic director, and his aesthetic is eye-poppingly appealing. The constant use of Dutch angles drove me crazy, though. Light was portrayed as a sadistic serial killer from the off, which definitely didn’t gel with me. Plus, the almost YA romance aspect totally threw me off. I also was saddened by the reduced role of my favorite character, L (played by Lakeith Stanfield in this iteration). This is a watchable film, but if you’ve watched the anime or read the manga series, you’ll definitely feel let down.