Vestron Video and Lionsgate are releasing The Unholy for the first time on Blu Ray as part of their Collector’s Series, and I had the opportunity to check out the film for the first time and to analyze the special features of this edition. Here are my thoughts:

The Unholy centers on Father Michael (Ben Cross), who is given his own parish to preside over after miraculously surviving a seventeen-foot fall. Sounds great, right? Well, not if the previous two priests of this parish have been gruesomely murdered. Fun times! Father Michael has to figure out what is happening to both his church and to the citizens of New Orleans (including a memorable turn from William Russ, a.k.a. Cory Matthews’ Dad from Boy Meets World as the leader of a Satanic club).

This film is definitely on the campy side, but I enjoyed it for what it was. I was genuinely interested to see how the story would unfold and to discover if Father Michael would succumb to the alleged demon that had killed the other priests. Even though the story starts off with a bang, the film does drag a little until the last twenty minutes of the film, where things quickly escalate into the realm of EPIC. The practical effects are dated, but still convey a sense of dread and ickiness. The acting is hit or miss, but can be forgiven for the sake of the narrative. Overall, this is an enjoyable, fun horror/mystery film to watch during a dark, rainy afternoon. 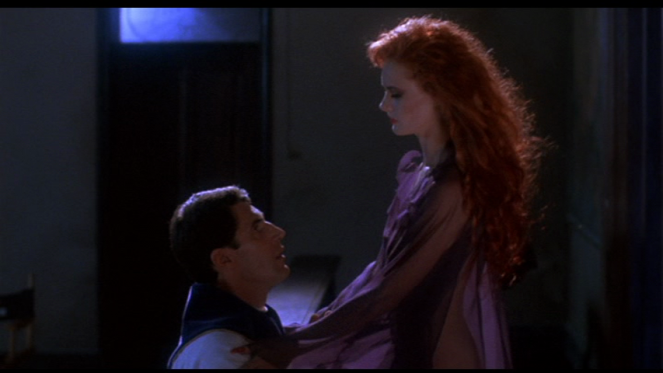 The transfer to Blu Ray is absolutely stunning. The colors pop, and little details stand out. This edition has obviously been crafted with love and attention to detail, and packed to the gills with special features. Some of the special features include TV and radio spots from the promotional period of the film, the ORIGINAL ending of the film (you can decide if you think it’s better than the awesome ending that ended up being in the film), an audio commentary from the director Camilo Vila, and an interview with Ben Cross called “Sins of the Father” (plus a plethora of other, interesting special features). You’ll definitely get your bang for your buck if you’re a die-hard fan of The Unholy.

*Thank you to Lionsgate and Vestron Video for providing me with a review copy of the film!