Because I’ve been slacking on movie reviews, here’s ten days worth all in one article! If you would like to purchase any of the films mentioned, please use my affiliate links. It helps the site grow and continue to exist 🙂

Broadway Danny Rose focuses on the exploits of a talent manager named Danny Rose (Woody Allen), as told by his acquaintances. Danny agrees to help a flailing singer (Nick Forte), but what Danny doesn’t realize that to aid this man, he’ll have to pretend like the singer’s mistress (Mia Farrow) is his girlfriend. Obviously, this causes problems.

I adore the film’s black and white aesthetic, and loved the story of Danny Rose. The performances are solid, and Allen proves that he’s a talent to be reckoned with with this film. 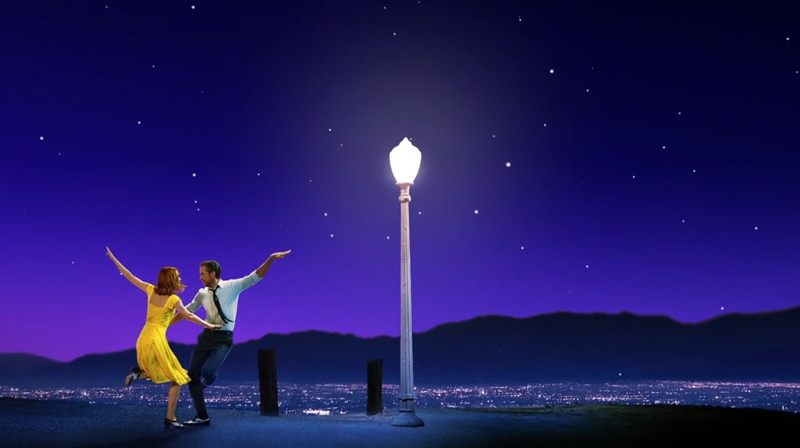 Damien Chazelle’s ode to Los Angeles and his tale of two dreamers is a knockout. Emma Stone and Ryan Gosling have palpable chemistry, and the story is extremely (and sometimes painfully) relatable. Chazelle has managed to create a modern musical that feels organic , even in its moments of whimsy. A rare treat of a film that demands to be seen.

Son of Saul follows a man who is working as a Sonderkommando in the Auschwitz crematoriums, who is convinced that one of the bodies brought in to be cremated is his son. He risks everything to save the body, in the hopes of redeeming salvation for what he’s done.

This is an emotionally taxing film to watch, but the performances are powerful and the messages the film portrays are wrenching. I wanted to enjoy this film more than I ultimately did, but it’s still a film you should watch if the premise sounds interesting to you.

This was a major disappoint for me. I adore (most of) Tim Burton’s work, and the premise sounded like a mixture of X-Men and Harry Potter. What was delivered was definitely underwhelming. Eva Green and Samuel L. Jackson were magnificent in their roles, and you can tell they relished their time spent as these characters. The child actors, especially Asa Butterfield, were less impressive. I felt no emotions toward these characters, which is a pity. The film itself is beautiful, and the costume design by Colleen Atwood is outstanding. The rest of the film disappointed.

A surrealistic, dreamy film by David Lynch, Mulholland Dr. follows a young woman, played by Naomi Watts, who moves to Los Angeles with stars in her eyes and dreams of being an actress. After entering her apartment, though, she meets “Rita” (Laura Harring), who has taken refuge in the home after surviving a devastating car crash. What follows is a woozily beautiful story of friendship, love, deceit, and dreams. This film definitely requires multiple viewings.

Based on the bestselling novel by ML Stedman, The Light Between Oceans centers on Tom (Michael Fassbender) and Isabel (Alicia Vikander) Sherbourne, who are living on Janus Rock, a small island off the coast of Australia, where they man a lighthouse. They are desperate to have a child, but Isabel keeps miscarrying.Fate seems to come to their aid one day, though,when a boat washes ashore with a dead man and a live baby inside. They take their baby as their own, willfully ignorant of the consequences this will cause.

Derek Cianfrance beautifully directed this adaptation, and Fassbender and Vikander’s chemistry is magnificent (enough so that they became an off-screen couple). Rachel Weisz is fantastic in a supporting role, and the story is faithful to the source material.

Maggie (Greta Gerwig) is desperate to have a child. She’s planning on being artificially inseminated, until one day she crosses paths with a handsome stranger named John(Ethan Hawke). Great, right? WRONG. He’s already married to a powerful, volatile woman (Julianne Moore). Nevertheless, they end up marrying each other and have a beautiful child together. Years later, though, Maggie tires of John and plots to reunite him with his ex-wife.

A funny, touching film about family and being careful what you wish for, this is a fantastic indie gem with great performances.

The year is 1941, and Barton Fink (John Turturro) moves to Hollywood to write the script for a wrestling film. He checks into the Hotel Earle, only to suffer writer’s block and to encounter eerie, unsettling events. The Coen Brothers had a strong directorial vision, and John Turturro and John Goodman are incredible in this film. The story is original and succinct, leaving you wondering whether Barton is imagining what is happening, or if it’s actually occurring.

A wonderfully cheesy B-movie, Chopping Mall centers on a mall in Los Angeles that has recently acquired robotic security guards. A group of horny teenagers manage to get themselves locked in one night, which is also unfortunately the night a bizarre lightning storm strikes the mall, turning the security robots into killing machines. The teenagers must survive the night however they can, often to hilarious ends. This is a fun romp of a film,with actually decent effects work. Sure, some of the dialogue is hammy, but this is a treat of a film to watch when you have that craving for a campy horror film.

This film garnered mixed reviews, but I thoroughly enjoyed it. Following an accountant named Christian Wolff (Ben Affleck), this is a fun thriller. Anna Kendrick, J.K. Simmons, and Jon Bernthal give solid supporting performances, and Affleck is wonderful as a man living a double life while also living with autism.